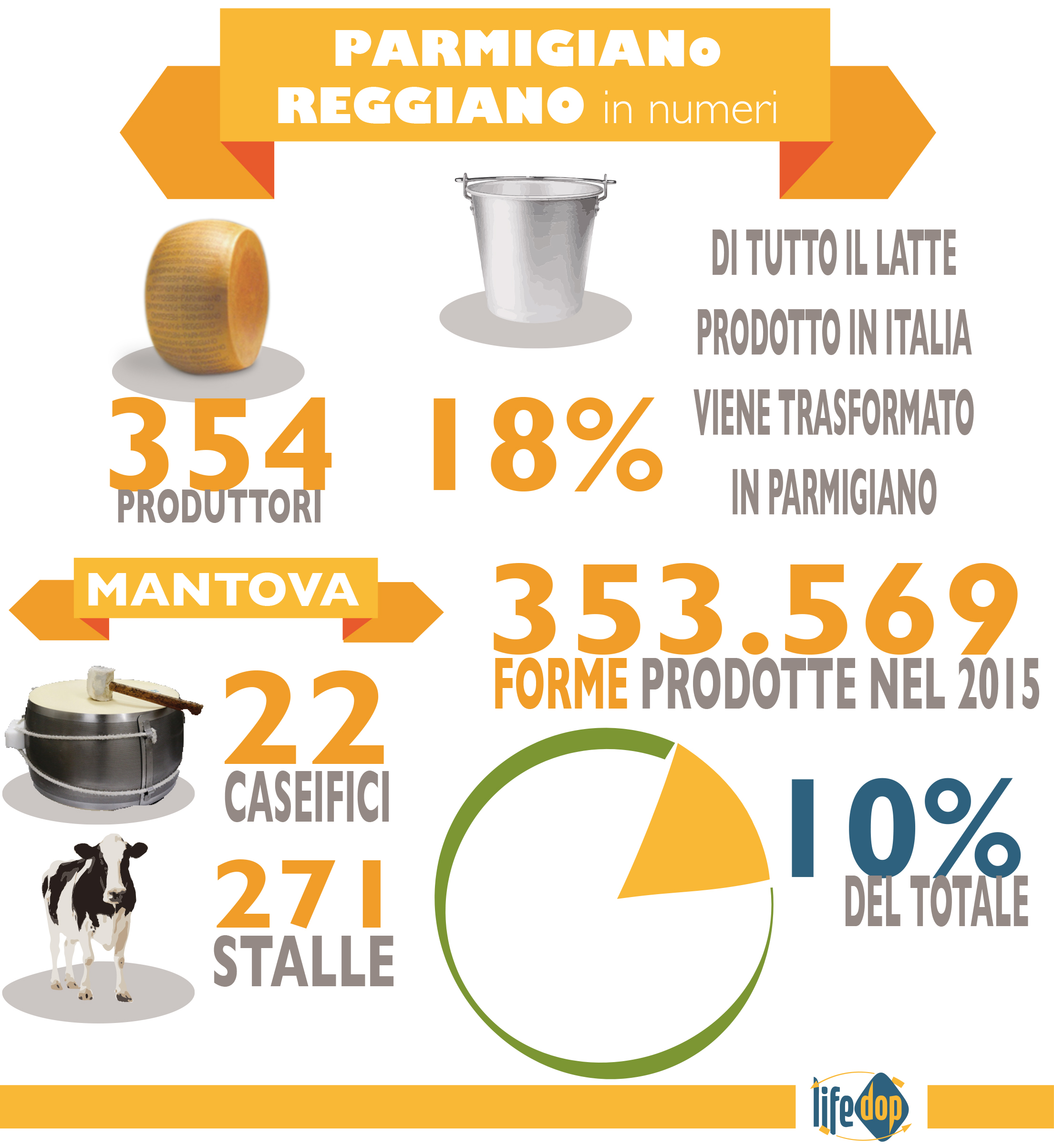 The Consortium for the Protection of Parmigiano Reggiano is constituded by 354 dairy producers, for an average annual production of more than 3 million forms.

The production of Parmigiano Reggiano absorbs about 18% of the volume of milk produced in Italy. The farmers involved are over 3,100.

Parmigiano is produce only in a small part of Mantua, the one located on the right bank of the Po River, which demarcates the border area.

Mantua hosts 22 Parmigiano Reggiano’s dairies, out of a total of 364, with an incidence of 6%. On the other hand Mantua production in 2015 was above the average: 353,569 Parmigiano’s wheels, for a percentage of the total of 10%.

Istat surveys on exports of Parmigiano Reggiano and Grana Padano in 2015 – albeit still partial – confirm the trend of continuous expansion in foreign markets. From January to November of last year the demand from abroad of the two PDO – except for the product sold grated – has increased in volume by 7.1% compared to the same period last year.
In the same period, the increase in exports and portioned wheels affected the most important destinations, such as Germany (+ 3.5%) and France (+ 2.3%) and with the exception of the United Kingdom, with a modest decrease of 0.6%.
In these three markets, which concentrate more than a third of exports of the two PDO, the share of Parmigiano Reggiano is estimated at 45%. In 2015 it also established the strong recovery of shipments to Spain and Greece, as well as some northern European markets, for smaller volumes but booming, confirming a remarkable dynamism. In particular in Denmark and Sweden exports over five years has grown by over 50%.

For some years it has confirmed a slow but steady trend: concentration of production in a smaller number of larger and more efficient size dairies. Compared to 363 dairies operating in 2014, the productive dairies in 2015 were 354. Of these, 102 are located in the mountains (105 in 2014).
65% of the dairies are represented by enterprises run as a cooperative, whose production in 2015 – equal to 2,339,994 forms – has declined year on year by 0.5%. More substantial in relative terms the contraction accused by farms dairies, whose production stood at 286,527 forms (-1.1%), while for the artisanal dairies has detected an increase of 2.9%.

As for the market prices, the phase of decline that characterized the trend of producer prices in the previous year, was halted in 2015. However, the first concrete signals of market reversal are appeared only towards the end of the year and then consolidated in a more continuous manner in the first months of 2016. The recovery in the last quarter of the year – also confirmed by the positive trend in prices in 2016 – has started to appeare at the first decline in cheese stock. Considering the trend of the first nine months of 2015, the average annual prices of Parmigiano Reggiano 12 months and over amounting to € 7.65 / kg, it was down year on year by 7.4%.